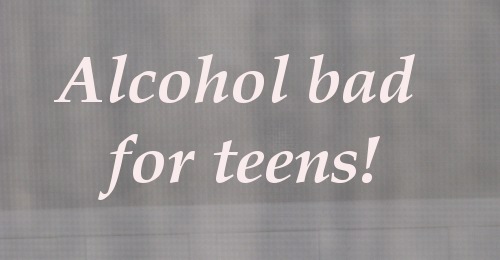 What are some of the main causes of teenage alcoholism?

What are some of the main causes of teenage alcoholism and what should you be looking for in your teen? When is drinking a problem for your teen and what causes social drinking to escalate to alcoholism? These are very serious questions that many of us struggle with. First let's describe what alcoholism is.

Sometimes parents think that when their kids drink it's not a serious problem, “at least” they're not using drugs! Many times this may be true, but what are the causes of teenage alcoholism?

A narrow line defines the progression from wanting a drink to NEEDING a drink. This is particularly true for teens, because their brains are not fully developed and research has shown that alcohol affects their brain function more than it does the brain and functioning of adults. This makes teens more susceptible to becoming alcoholics. Exactly where the line is drawn between alcohol abuse and dependence depends on the individual, but in simple terms, alcoholism is when the teen craves alcohol and has lost control over how much he/she drinks.

Alcoholism is a chronic condition, a progressive disease that can cause a variety of serious health issues and even death. In most cases, alcoholics experience a physical dependence on alcohol. They need to drink to receive the effect the alcohol gives them.

A definition of alcohol abuse is drinking too much. A teen’s drinking may be getting in the way of a normal life. They might get ticketed for DUI. They might have some troubles at work or home, but they have not necessarily lost total control over their lives. Again, the causes of teenage alcoholism is different for each teen. It’s a matter of degree. As the condition progresses, the line becomes more evident.

Alcohol depresses the central nervous system. At first it may stimulate, but as they continue to drink, they become sedated. The more sedation, the more risk of complications such as heart failure, respiratory failure, etc. As alcohol addiction progresses, it can be life-threatening. If a teen goes on a “bender,” they may be in jeopardy of falling into a coma.

Teenage alcoholism is a disease that “sneaks” up on its victims. If a teen has another kind of disease or issue, there is a much greater likelihood that they will admit to being hurt or sick. Those abusing alcohol, or are already in the grip of alcoholism, do not think they have a problem. That makes the possibility of them receiving treatment more difficult. If a teen breaks an arm, he/she will gladly allow a physician to treat it, but an alcoholic will insist they don’t have a problem. It’s your problem. This is another one of the causes of teenage alcoholism, hiding from themselves and others that there is a problem.

What are some of the signs of teenage alcoholism?

Has drinking become a more important activity in their life? Have they lost interest in other things--in friendships--or are they even creating an elaborate ritual for their drinking (“beer bongs”, drinking shots as part of a game, etc.). Maybe it’s routine for them to hit the friend's house right after school for a drink, or they make a cocktail before dinner. Then they continue drinking during the meal and after. If you say anything, they get angry. If they don’t have access to alcohol when they want a drink, or when their drinking ritual is set to begin, they also become angry.

Another sign is the teen forgetting conversations, or not remembering tasks at work. You’ve probably heard of someone “blacking out” after drinking. That’s another indicator and one of the causes of teenage alcoholism. They guzzle drinks, like an athlete taking Gatorade on a hot day. While others in the group might order a regular mixed drink, they order a double. They drink to get drunk, because drunk is what feels “normal” to them. They want to feel good.

Causes of teenage alcoholism: I Must Drink MORE to show I can hold my liquor!

Teenage alcoholics develop a tremendous tolerance to the effects of alcohol. Because of that, in order to experience the same effect they had before, they need to drink more. They have no control over how much they drink, and they “need” more to feel good. Regardless of what the drinking is doing to them physically, they continue to drink. Regardless of any social consequences, they drink. They have to drink. In order to help them realize that they have choices, you first need to remove the access to alcohol.

Take away access to alcohol and the alcoholic may experience nausea, vomiting, sweating, the “shakes,” and convulsions. An alcohol abuser, who does not have the physical dependency on alcohol, may or may not suffer these types of withdrawal symptoms. They do not experience the same kind of craving for alcohol and the compulsion to drink.

Line between abuse and alcoholism varies between teens.

Where the line is between drinking alcohol and abusing alcohol, varies. It has been crossed when, in many cases, a teen needs a drink as soon as they get up in the morning. They may be aware of their drinking and feel guilty about it, so they keep their drinking a secret. They may be aware that they need to cut back or stop altogether, but they don’t. When told they may have a drinking problem, they get angry. Any of these situations is a sign that a teen might be abusing or already addicted.

One teen can enjoy alcoholic beverages and never become addicted, while another has one drink and is already in trouble. How is this so? What are the causes of teenage alcoholism?

Alcoholism, like other forms of drug addiction, is a disease of the brain. The Mayo Clinic explains that drinking causes a gradual alteration in brain chemistry. For example, the gamma-aminobutyric acid (GABA), which controls impulsiveness, and glutamate, which stimulates the nervous system, are altered by alcohol. You can see how a teen can lose control over their drinking because the brain’s reward system is changed. The brain is literally tricked into thinking it needs alcohol to function.

There is also a genetic component to alcoholism. If your parents abused alcohol or were alcoholics, the chances are good that you are genetically predisposed to the same condition. The child of an alcoholic is more prone to using other drugs and becoming addicted. If you look at the family histories of alcoholics, you’ll probably find generations of the disease.

Low self-esteem also one of the causes of teenage alcoholism.

Teens often suffer with low self-esteem or depression and this means they have a higher chance of becoming alcoholic. If they are in an environment where their friends drink, or their significant other drinks, they may be at risk for developing addiction. The teen susceptible to alcohol abuse or drinking may be impacted by the “enablers” in their life. The enablers aren’t necessarily addicted or in trouble, but the “hurting” teen might be swept along and the disease progresses as a result of that action.

Causes of teenage alcoholism: Teens are under a lot of stress and anxiety.

Anxiety and stress play a role in the onset of alcoholism and are two of the most common causes of teenage alcoholism. Teens may feel the need to numb their emotional pain and turn to alcohol for the solution. There is evidence that stress hormones play a part in the development of alcoholism. A void exists in the life of the alcoholic and alcohol fills that emptiness.

There are also social factors at play. Drinking is glamorized in America. Every sporting event has beer commercials. Drinking the right kind of vodka makes you sexy and sophisticated. Teens drink at parties, at ball games, at social events, and even at church festivals. Drinking is socially acceptable, but it can be a big problem.

Generally speaking there are some numbers to consider when trying defining how much is too much.

Drinking more than 12 drinks a week for teens can contribute to the development of alcoholism, if the teen is small, less than 140 pounds 8 drinks a week may be enough to induce alcoholism.

But there are more risk factors involved in the causes of teenage alcoholism, such as drinking at an early age. If parents allow their children under 16 to drink, those children are at greater risk of developing a problem, and boys are more likely to become alcoholics than girls.

When should I seek help for my teen?

Teens who are in need of help because of alcohol abuse or drinking are not likely to ask for it. They are not likely to admit they have a problem. As a friend or family member, you need to be the one to take action. One of the first calls you can make is to your doctor for his/her perspective, but you may also consider calling a local drug and alcohol treatment center. We are all composed of body, mind and spirit, so another source of support would be your pastor or rabbi. Hospital chaplains are also good resources.

If a teen agrees to treatment, either willingly or as a result of an intervention, it will be important for them to receive a physical examination to determine if other medical issues need to be addressed. There may be medical problems unrelated to alcohol, but often teens have problems and do not reveal that alcohol is an issue . If a doctor suspects that alcohol is a contributing factor, he/she will probably ask a series of questions to get a more complete picture, and also do a screening to determine if alcoholism is present.

Another one of the causes of teenage alcoholism:
It’s not my problem, it’s your problem!

Getting a teen with an drinking problem into treatment is not an easy task. The teen abusing alcohol or already addicted to alcohol will deny any problem, or if they do acknowledge a problem, they will minimize the concern. It might take a group effort to get a recovery plan moving in the right direction. If your doctor is your first consultant, he/she may ask the teen for permission to speak to family members. Confidentiality laws prevent the doctor from having that discussion without consent. That might make matters more difficult.

Another route is an intervention. As the concerned family member or friend, you call a treatment center for consultation. They will do an assessment of the situation and are best equipped to take the appropriate action. In another section we will discuss interventions in greater detail.

For more about drinking and alcohol intervention click here!

In summary, the first Step of the AA 12-Step process is a good definition for having an alcohol problem: “We admitted that we were powerless over alcohol--that our lives had become unmanageable.” Does alcohol get in the way for your teen? Can they function without a drink? Do they exhibit any of the signs and symptoms we presented? If so, we encourage you to seek help. Call a drug and alcohol treatment center and help your friend or loved one, or yourself, get on the road to recovery.