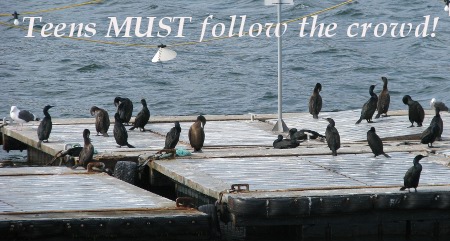 FACT: Teenagers are at particular risk of alcoholism and drug addiction, more so than adults in their early twenties, because the frontal lobe of their brain is not yet fully developed.

FACT: A few years ago some statistics were gathered on people who were either abusing drugs, or had developed dependence or addiction. One stat was alarming concerning the breakdown in age groups. Teens 12-17 had the highest rate of abuse or addiction, 60.6, compared to 37.4 % of young adults aged 18-25, and 24.3% of those older than 26. The younger a child is the more apt he/she is to develop a problem. .

FACT: Parents are the front line fighters against addiction.

FACT: Parents can partner with educators, law enforcement, clergy, social workers and concerned citizens to try to curb drug abuse and limit the cases of addiction.

FACT: Open and honest communication, a dialog, is essential to help teens understand the dangers of abuse and addiction.

FACT: The most common mistake parents make is trying to force their teenager to comply or obey rules. Parents need to be parents and not best buddies.

FACT: Teens will begin drinking, or try illicit drugs, or abuse prescription drugs for a variety or reasons, including, but not limited to peer pressure, desire to fit in, wanting to be cool, want to look “grown up,” or a desire to feel good and deal with self esteem issues.

FACT: The human brain does not mature until one is about 24 years-old. The brain develops in sections, from back to front. The frontal lobe is the last to mature. The first to develop is the cerebellum, which handled motor function and sensory processing. In the “middle” is the nucleus accumbens which regulates motivation. These teen addiction facts explain a lot about why kids are SO much at risk.

Next comes the amygdale, controlling emotions. Follow the pattern? Teens will have the motor skills and sensory functions of an adult before anything else develops. Finally, at the end, the frontal cortex is regulating judgment.

FACT: Teens using drugs interrupt this development and potentially could cause themselves irreparable harm.

FACT: Teens who abuse drugs may arrest their brain development and experience cognitive and emotional problems as adults.

FACT: Parents who do not understand how their child develops and assume that they are going to be “level headed” and responsible are taking a serious risk.

FACT: Among teens, the most abused drugs are alcohol and marijuana.

FACT: Teens do not necessarily perceive risk, nor do they necessarily understand that they need help. This shows the need for family members and loved ones to be aware of what the teenager is doing and get them some help. Just like adults, teens struggle with denial. By the time a teen understands that something has gone amiss, they are in serious trouble. People often ignore many of these teen addiction facts and boy is that a bad idea.

For more about teen addiction facts visit our home page, or return to Teen Addiction.