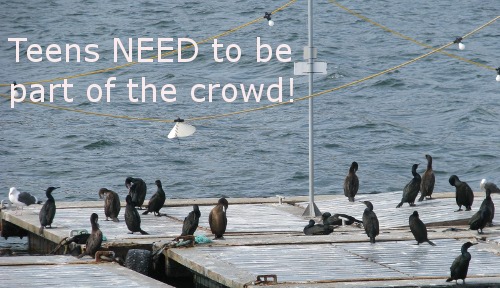 Drugs and Teens: What can parents do?

It’s every parent’s nightmare facing teen drug addiction. As children enter their teenage years they begin to separate from their parents, explore the adult world and fashion an image of their place in it. Even the most conscientious parents may not be able to protect their teens from the predatory lure of drugs, readily available in or around all schools.

Borrowing a sports analogy, the best defense against teenage drug use is a good offense. Parents need to equip themselves with solid information about teen drug addiction , a realistic view of their child and access to professional help if there are any early warning signs of drug use/abuse.

Communicating with teens can be a challenge, especially because they are beginning to spread their wings and desire independence from mom and dad. Stay calm.

The most common mistake parents can make is trying to force ideas and values on the defiant teenage mind.

I was that way. There’s a leadership responsibility that always needs to be in evidence, and parents need to be parents. Trying to be “best buddies” is not a good strategy. However, parents need to meet their children where they are at. That means trying to understand the situation from your child’s perspective.

Teenagers will probably come up with some very wrong reasoning, seriously flawed ideas and their whole world view will likely be counter to that of their parents. But they have a NEED to be heard and respected.

It’s one thing to accept an opinion counter to your own, and it’s quite another to approve of it. Try working with your child’s ideas and concepts, and have an open and non-threatening discussion about them. You can establish rules of engagement with your teen and agree that both of you are allowed to express ideas and opinions without fear of retribution.

The key is to remember that the parent needs to be the one in control. As a chaplain, I do a lot of counseling work and my approach is entirely patient-centered. They establish the themes of the conversation, but even though I am not deciding the topic, or necessarily directing the conversation, I am still in control.

Remember that your teenager, like a patient in a hospital, is probably going to be very myopic. He/she will see things only from their perspective.

Take a step back and see the entire situation. Go with their feelings, their concerns and walk down their path. Share the experience.

Double Whammy: Teenage Brain and the Teenage brain on Drugs

I think I’m like most people who used to believe that the brain matured at the end of childhood. Wow, how could I have been that wrong? Do parents know this? Probably not. The brain actually doesn’t mature until a person reaches 24 years of age.

The reason why this is important is that it should send a shocking warning signal to parents of teenage drug abuse and that their teenaged son or daughter is at high risk for trouble if they take drugs.

The idea of a developing brain on drugs is just, well, scary. The brain develops in sections. Picture this as being development from back to front. First to develop is the motor coordination and sensory processing in the cerebellum, in the back of the brain. Next, the nucleus accumbens, regulating motivation, kicks in. The amygdale, controlling emotions develops next. Finally the prefrontal cortex, regulating judgment is finished. Teenage drug abuse and hurt this development.

That is exactly why physical development does not correspond with mental and emotional development. Take as look at high school athletes. We see a man-child out on the field, who has the ability to score touchdowns, dunk a basketball or throw a baseball 90 miles per hour, but he is still a child. Teenage girls, who may have begun developing sexually as early as the fourth grade, are still children.

As the brain develops, we move into adulthood. If the brain is not allowed to fully develop, or that development is slowed because of teenage drug abuse, you can see that the child is in serious jeopardy of having problems.

I mentioned the physical development. Even that is not complete during the early teen years. I umpire baseball, and I can tell you that one of my pet peeves is adults teaching kids how to throw a curve ball before they are in high school. To be truthful, I don’t like the curve ball even in freshman and junior varsity games. The elbow is still developing, so the curve, which places a great deal of pressure on the elbow, is a very bad idea.

“Oh, but my Johnny is level headed.” Don’t count on it. Remember, the front part of the brain, which regulates judgment, is the last to develop. Bad planning and bad judgment are hallmarks of teenage existence. Teenagers like activities with high excitement and low effort. They can’t necessarily control their emotions, so the hot emotions come out quicker than the cooler ones. They are interested in experimenting and teens are known for thinking that smoking, drinking or taking drugs is “mature.” Children graduate from high school, then go off to college in the fall and all too often indulge in binge drinking and experiment with drugs.

Parents can’t raise their kids in a bubble, but they need to know what’s out there and how teenage drug abuse can impact their child’s life. If a child is not fully capable of making a good decision, parents can help them form a good plan by openly discussing drug use with them. Let this discussion be a discussion, not a lecture.

Be aware of what your kids are doing. The last thing you need is to be shocked someday to discover that “Little Johnny” is smoking pot, or the life of the beer party, or the “go to” guy for good drugs or a experimenting with teenage drug abuse. Your son may shave, but that doesn’t make him a man. Your daughter may be 17, going on 25, but that doesn’t make her an adult. They are still children.

For more about teenage drug abuse link to Intervention

All we can do now is learn from our mistakes.

My name is Emma I’m 17 years old and started using drugs at 15 but first I’ll tell you a lil about my life.

i
was adopted from Russia at 8 years old with my older brother and came
back to America with my foster mom. My real parents were both drug
addicts and my mom had me and my brother at a young age and couldn’t take
care of us.

Till 8 years old i stayed in two orphanages with my
brother. my father died when i was 6 due to a bad drug deal. after
moving to America i was the perfect daughter, loving, caring sweet people
enjoyed being around me.

But when i hit 13 something in my mind
said screw it. i started disobeying my mom talking back and thinking i
could do whatever i wanted just cause I’m 13.

When entering 7
grade i moved to a new town here i made lots of friends pretty popular
in school did volleyball track and cheer leading. School was never my
thing so i payed more attention to sports.

My first time getting
caught shop lifting was at 13. I didn’t think anything of it and thought
it was funny and a game. Every time that i went to a store i had to take
something even if it was little. This was my addiction for now.

As
i got into 8 grade things were still the same until this boy came in to
my life and i thought that i had to impress him so he offered to let me
smoke with him and of course i said yes.

After that i didn’t
smoke much and then later tried drinking and instantly fell in love with
it. My mom didn’t know i was doing anything. i still remember the day she
was driving me to school and i was talking about how i wanted some fake
color contacts and then the next thing my mom gets a call saying that i  ODED at school on Xanaxx with 5 other girls.

I got kicked out of school and got sent to alternative school and the
only part i cared about was the sports. After that day things changed i
no longer cared about ANYTHING. My boyfriend broke up with me, he was
the one i had lost my virginity to.

After that i started hanging
round more with people that did drugs and would always have them on
them. To me if you didn’t have drugs i didn’t want anything to do with you
and for some the only way i could hang out with them was only if we were
both high.

I started hanging around older boys trying to look
for that protection that i never got from my father. It was easy cause
as long as i was nice to them they would provide me with drugs. i
started getting in trouble with the police and got sent to Green Oaks 5
times for saying i wanted to die and kill myself.

I got sent to
my first rehab at sundown ranch. i got out and later relapsed again. i
got sent to my next 3 rehabs at the age of 16, ran away from one, got
kicked out of one, and my last one i completed.

I look back and
think how stupid i was for the things i have done and how i hurt the
people i love to get high, but once that high is gone the same problems
are here. i just want to thank my mom for all her support and for never
giving up on me. NEVER GIVING UP.

She took me in as her child
and this is what i have done. It will take time to earn her trust and
make our relationship healthier. Rehab and hospital didn’t help me. I see
myself as a social user and now all i do is smoke occasionally. i wish i
could go back and change things but all i can do know is learn from my
mistakes.

Thank you for sharing your story. So many
young people get into trouble with drugs and wind up paying a terrible
consequence. It is good that you have a mother who loves you and is
devoted to your care and well being. It has been a difficult path for
you, but it sounds like you’re making improvements.

However,
one thing bothers me. You call yourself a social user. Social users
can still become addicts. Once an addict, you can’t really be a social
user without the fear of slipping back into old behavior patterns.

Alcoholics
go to treatment and then go to meetings to live a good recovery
lifestyle. Alcoholics Anonymous membership is for those who do not want
to drink anymore. It’s all about living a healthy life without alcohol.
Of course, some people will argue that, but my point is you’re taking a
serious risk using at all, for any reason.

People say
smoking is harmless. They say they can handle it. Given the troubles
you have had in your life, I’d say you can’t handle it. There is so
much life to live and so much to experience.

Believe it or not,
you can be happy, fulfilled and live an exciting life without using
drugs. Using drugs is the great lie, because nothing good comes of it.