It was supposed to be a fun day at the beach for Carlos and his family, with swimming, sand castles and maybe an ice cream cone. Everybody was there that day. 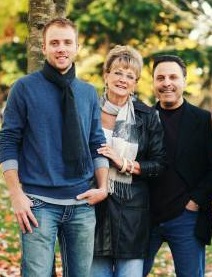 His mom and dad and three older sisters were with him and they were all looking forward to a day of play, not a day for near death.

Carlos tried to hold back tears as he recalled the day he nearly lost his life at a beautiful beach in Mexico, where he grew up. The event happened many years ago, but for Carlos, it was like yesterday. It was a beach on the Gulf side of the country. There was a small bay, with rock formations not far from shore. Carlos was very young and not a strong swimmer, but he decided to venture out and go to the rocks, while his sisters were playing in the sand and splashing each other. As he swam out he began to have difficulty fighting the current. He was being pushed farther out than he wanted to go.

Meanwhile, as he recalled, “My father had to go to the concession stand to buy beer. He was an alcoholic. That’s all he did.” As the current swept him farther and farther out, Carlos began to yell for his father, but his father did not hear. He yelled. Father did not respond. “I managed to get to some of the rocks,” he said. “I was tired and I could not fight anymore, but I hung on to the rocks.”

Carlos kept yelling for his father. Soon his mother and one of his sisters went to find his father. The father at first did not seem to be alarmed, thinking that Carlos was playing some kind of a joke. He drank his beer and told them nothing was wrong. His mother and sister took him by the arm, dragged him away from the concession stand, and pointed to the rocks where Carlos continued his struggle. Now convinced that his boy was in trouble, the father swam out to the rocks and took hold of his son.

“I am just like my father,” Carlos explained. “I am an alcoholic just like he was. He didn’t hear me. He was drinking, and now I drink and I don’t hear my children.”

Carlos has experienced the helplessness of addiction. In a sense he has an understanding of his father’s behavior, but at the same time a deep-seeded resentment towards his father, who did not respond to his perilous need. There is a genetic component to addiction, as patterns of behavior in families repeat across generational lines. Addiction has cycles in families, just as it does in individuals. Carlos was in treatment to break the cycle.

“I fear for my son,” he said. “I would never forgive myself if harm came to him because of my drinking. He is the same age now that I was when I almost drown that day. That scares me. What if I let him die because I was not there for him?”

The circumstances of Carlos’ story are repeated every day in one way of another in this country. Parents, addicted to alcohol or some other substance, are not able to respond to their children. Addiction robs them of their capacity to reason, to act responsibly, and most of all to be a loving parent. The deep emotional scar leaves a void in the child, and that void must be filled. The generational cycle continues to turn.

Carlos is working the 12-Steps, trying to fill the void and break the cycle. “I do not want this to happen to my son,” he asserts. “It is my responsibility.”

Are you or your loved one struggling with addiction?
YOU MUST TAKE ACTION NOW!
Use this at-home guide to End Addiction Forever:Click here for details!

Copyright 2014 by Mission Enabled, All rights are reserved.