What is the “Drug of Choice”? 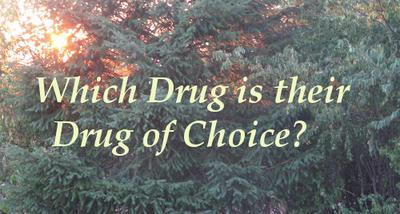 We are all different. Part of the human condition is the gift of free will, the complexity of making choices and the endless succession of consequences that life brings.

Drug of choice is a phrase used to describe personal preference. Which drug does a person choose? We’ll take a look at how the drug of chosen is an important piece of information that is necessary when addressing the needs of an addict.

Part of the puzzle

Personality is a piece of the puzzle, and some are more likely to develop addiction than others. The addictive personality, for example, is characterized by a person’s inclination to be more impulsive, sensitive, emotional, anxious and sometimes aggressive. There are types who always want reward, or continuous gratification and their behavior might seem to others as being reckless or foolish.

It doesn’t have to be drugs, as the gambling addict is always chasing the excitement of the game, or people who overeat are trying to
cope with the stresses and disappointments of life. People who have other mental and emotional
issues, such as depression, are at greater risk of developing addiction. Even though somebody might have what we would term an addictive personality, that doesn’t mean they are going to become an addict, just as someone who eats at a fast food restaurant is not automatically going to become fat.

It does have a genetic basis

Addiction has a genetic component. If alcoholism runs in the family, chances are anyone in that genetic line has a predisposition to becoming an alcoholic. However, the disease of alcoholism needs a precipitating event in order for the cycle of addiction to begin. The person has to take a drink. Addiction is a brain disease that can lay dormant for years with no worry of ever developing, unless the substance is introduced to the brain and that neuro receptor is activated. Identifying an addictive personality may be a useful risk factor, but it is certainly not the determining factor.

Alcoholics often talk about the “click” they experienced when taking that first drink. It is sort of an “ah ha” moment, as the substance is introduced into the brain and something happens. In the alcoholic, the brain wants the alcohol. It is a drug of choice, because it meets certain criteria. Perhaps it helps to relax the anxious mind. Perhaps it numbs pain. Perhaps it helps the individual cope with the problems of life by making him/her more confident. For whatever reason, that particular drug is what the addict is looking for.

Understanding their personality will help loved ones recognize some of the factors that go into a person using any particular substance. When you recognize the behavior, it is easier to see the situation for what it is and maybe help come up with a solution. In any event, drug of choice is an important indicator for what is needed.

A more logical explanation for the link between creativity and addiction is that people who exhibit the traits of an addictive personality
tend to be drawn toward creative occupations. Also, since creative people frequently live their lives in the public eye, their struggles with addiction simply receive more media attention than the problems of an average person.

People with certain personality traits may be at an increased risk of developing a drug addiction, but drug abuse can also have its own effect on the addict's personality. A person struggling with drug addiction is often described as:

However, since these traits can indicate a variety of other problems as well, it is important to obtain a proper diagnosis from a qualified
medical professional. Attempting to diagnose a drug addiction on your own is both ineffective and potentially dangerous.

Addiction affects someone’s personality and behavior in a variety of ways although this very much depends upon the type of substance used
and the amount; their psychological make up before the addiction and physical health and their lifestyle.

Some substances have a greater effect than others upon mental health, for example, heroin is stronger than nicotine and will have a bigger impact upon the brain.

Added to that is the fact that all of us are different in regard to our psychological make up which means that no two people are affected in the
same way. So, one person may experience a greater level of ‘damage’ than another person using the same substance, mainly due to their brain chemistry. So what does an addiction
do to someone’s mental health and behavior?

The most obvious sign is the fact that they behave in ways which are totally out of character. They may become secretive or deliberately
offensive; self-harm; lie, cheat or steal; or place their need for their addiction above their family and friends.

There are other examples including paranoia, restlessness, low self-esteem or a lack of trust in themselves and anyone else. On the other
hand they may behave in an arrogant and uncaring manner as if only their needs matter and no-one else.

As the addiction worsens they may start to withdraw from their family and friends or spend time with people who you don’t know. The highs and low of their addiction can lead to anxiety and depression. The chemistry of the brain is affected by addiction, for example, taking crystal meth, amphetamines, cannabis, ecstasy and excessive alcohol use. These have the power to change certain structures of a person’s brain which have a dramatic affect upon that person’s personality.