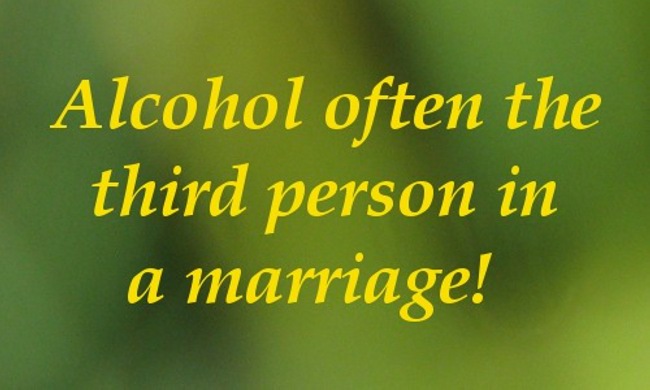 It’s like being
married to two people. For an alcoholic,
there is the important marital relationship with his/her spouse and then there
is the relationship with alcohol. The
progressive disease of alcoholism is not only detrimental to the physical
health of the addict, but also detrimental to the marital relationship, as one
partner is exchanged for another. It’s a
sad story that is repeated millions of times, as alcohol becomes the wedge
between marital partners and marriages are destroyed as a result.

People will
sweep their drinking problems under the rug by saying, “I’m not hurting anyone
but myself,” or they will point out that their drinking isn’t a problem at all
and that everything is under control.
Denial is the game and alcoholics become good at playing it, but little
do they realize that they are causing damage, sometimes irreparable damage, to
their marriage, their family and their future.
It’s bad enough that alcoholics abandon their spouses for alcohol, but
all too often they neglect their children as well.

Alcoholism
doesn’t just burst on the scene and wreck marriages. It’s a process. The best way to avoid the dreadful
ramifications is to recognize the symptoms early on and take action. In so many cases people are very passive and
consider the alcoholism to be their partner’s problem. Guess again.
Alcoholism is a family disease and all members are impacted, so the
drinker isn’t just hurting him/her self, they are hurting everybody.

Not everybody that drinks is going to become
an alcoholic and not everybody who even drinks heavily is going to become an
alcoholic. Statistically, about one in
nine will develop the disease with prolonged use. Sometimes the symptoms are rather subtle, but
if you watch diligently, you’ll learn to pick up the signals.

Think of alcoholism as a relationship between the drinker
and their drug of choice. Because we’re
talking about alcoholism in the context of marriage, think of the disease as a
form of emotional adultery. That sounds
extreme, but alcoholism’s progression means that more and more time is demanded
of the alcoholic to tend to the needs of the disease.

Think of it as a mistress, who starts out seeing her lover
once a week for an hour, but winds up demanding attention every day for two
hours. People go down the disease path
and follow a cycle. They just drink at
first, then over time the drinking increases and things start to get out of
control.

Suddenly they’re drunk every night and no one remembers when it started, alcoholism marriage has gotten it grip.

Alcohol is the third
person in a marriage

The notion that
alcohol is the third party in a marriage isn’t far -fetched at all. As the disease progresses it becomes more
and more the center point of a person’s life.
They may start out by having a few beers with friends after work, but
then wind up coming home very late, sometimes missing dinner and that important
time with children in the evening. The
progression continues and soon the parent is not there for the child’s birthday
party, or if he/she is there, they are drunk.

They may miss
work, calling in “sick” or they may lose interest in their job or
professional. Performance issues begin
to crop up and the alcoholic, although “functioning” on a day-to-day basis is
on the track to lose his/her job and fall into a difficult pit. Sometimes people function for years and nobody
really knows that there is something wrong, but an alcoholic cannot sustain
this masquerade forever, and eventually something is going to crack.

I know of a woman who recently lost her job after years and
years with the same company. She began
missing work, doing poorly, all because her alcoholism finally caught up to her
and took over. Her employer was
heart-broken, but he had to let her go. He husband is in the same place, alcoholism marriage is destroying everything.

Because they view alcoholism as a behavioral problem, a lack
of will power, or a moral failing, they do not recognize the disease aspect of
it and are carrying serious emotional baggage.
They have an emotional attachment to the alcoholic, to their family and
it’s difficult, if not seemingly impossible, to be objective.

But if the husband or wife looks at alcoholism as the enemy,
not their spouse, they can be part of the process that brings the alcoholic
back to sanity and helps them see the reality of what they are doing to
themselves.

Al-anon can certainly
help the family

Husbands and
wives will benefit from Al-Anon, an organization dedicated to providing
emotional support to families of alcoholics, to help them through the process,
connect them with resources and be a sounding board for their feelings. Once spouses and family members can make the
transformation from “victim” to “player” in the battle against the disease,
they can see themselves as a part of a team and learn how to be effective in
helping the one they love.

Of course, Alcoholics Anonymous knows exactly what the
alcoholic needs. They have helped
millions of people for over 70 years and despite claims that there are cures
for alcoholism, or that alcoholics can still drink and not be alcoholics, the
AA’s 12 Step process, which is used by over 250 different self-help groups
worldwide, remains the gold standard for helping alcoholics climb out of their
pit and get back to a healthy and productive lifestyle. It can also sometimes save alcoholism marriage.

Alcoholism marriage, spouse should not be
a victim

The mistress of
alcohol, the unwelcome third party in a marriage, can be removed through
treatment and a good recovery program.
Spouses do not have to be victims and they can do a lot to save their
marriage but knowing the right steps to take and being willing to make a stand
and remain firm. Too many times alcohol
wins because people don’t have resolve.
It doesn’t have to be that way and there is hope for anyone willing to
persevere.

I kicked my spouse out of the house a year ago, but he/she says they are not using anymore. Should I take them back?

This is a tough question and one that may produce an answer you don’t
want to hear. If you’re asking this question it tells me that you still
have feelings for your spouse. Your inclination is to give it another
try, but you’re not sure. Let’s go over a few things.

Understand
that alcoholism is never conquered, it’s just controlled. I used to
smoke cigarettes. I have not smoked for 20 years. I am still a smoker
because I know the addictive power of nicotine. If I smoke again, I will
go right back to where I was when I quit. The same is true with
alcoholism. Without going into all of the factors, which are discussed
on another page of this site, when people are in recovery they are not
immune to alcoholism, so any using will take its toll.

When your
spouse was with you I can only imagine some of the fights that preceded
his/her departure. You argued. Doors were slammed. He/she walked out
many times to be with “friends.” It didn’t do any good, did it? You’re
probably hoping that he/she has changed, when in fact you are also in
need of change. What was your part in this relationship and what have
you changed that will make the relationship work if your spouse returns?
You’re probably thinking, “Wait a minute. I’m not the alcoholic. Why to
I have to change?” Your approach to your spouse and the alcoholism has
to change.

You need rules. You need a strategy. And most
importantly you need to have the backbone to follow the plan. You love
them, you feel for them, you don’t want to hurt them, but do not enable
them. Get help from professionals and from people who have walked down
your path with their spouse. Your spouse needs to have the help and
support of other recovering alcoholics, so a 12-Step program, or other
alcoholism support groups are very good pieces of your plan for your
spouse. That’s an example of a new rule you might use. They go to group.
Likewise, you are not an island and you need support. Groups like
Al-anon are made for you. Other people have asked the same question and
have similar experiences, so why not allow them to share with you and
support you?

An alcoholism counselor can give you excellent advice
for your plan and help you implement a strategy that will be the most
effective for your situation. No matter how you feel emotionally about
your spouse, when it comes to alcoholism, you need to be the boss.
Establish firm ground to stand on, don’t give in, and allow others to
support your plan.

That completes our page on Alcoholism Marriage, visit our home page for more information.