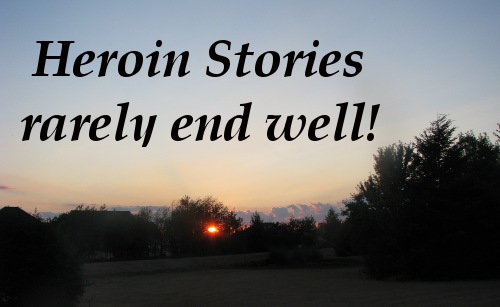 It happened just this morning. I received a sad email from a mother who has just spent the last four years struggling to help her child to end his heroin addiction. She writes:

I have a 20yr old son in
recovery as I am writing this. He was a good student through catholic school.
He was an outstanding Basketball player. The year between junior and senior high he start taking a pain medication Oxycontin.

Our lives changed that summer and 4 yrs later we are in a battle I don’t wish on anyone. Last year he moved heroin. He OD’d twice and lived on the streets after he stole from everyone in the
family that tried to help him.

I was his biggest enabler and we are now both working on our recovery’s. After 5 failed treatments, he spent 4 months in jail and has been out for a month. Not sure what the future holds for us just praying the worst is over.

Tragically this is an all to common story of addiction and co-dependence.

Helen’s father stood over her hospital bed, head bowed in silent prayer, asking God to help his 15 year-old daughter through withdrawal from her heroin addiction.

He’s a good dad, loves his girl and can’t understand how such a young person, his child, could get into such deep trouble. He did EVERYTHING to try to help her and then his co-dependence started.

Heroin addicts aren’t high school students, they’re people who live on the streets and beg for change. Heroin addicts don’t have a 3.75 grade point average and apply for acceptance into the top colleges. Well adjusted teenage girls don’t attack their father with a golf club and curse him. How did it get so messed up?

Her appetite was increasing.

Helen had been using for nearly 18 months, not always regularly, but in recent weeks her appetite for heroin increased and dad discovered that his coin collection and jewelry were gone.

Her allowance was generous, even by upper middle class standards, but once the addiction took over, it was insufficient to buy her the desired amount of the drug. She stole from her father, from her mother whom she lived with on alternative weekends, and from her older brothers and sisters.

Some of her grandmother’s possessions were missing, but she didn’t put two and two together and never suspected her granddaughter had ripper her off. As she increased her usage, Helen discovered that not having enough drug was far worse than having the problem of addiction.

Coming off heroin was difficult. Her body had become dependent upon the replenishment of the drug, as the heroin would attach itself to Opioid receptors in her brain and spinal chord.

Her body no longer produced its own natural chemicals to manage pain, so not having the heroin caused her to become “dope sick.” When the drug was not replenished, she went into withdrawal.

She didn’t start out that way. When she was in eighth grade she and her friends were given marijuana to try. Most of the kids didn’t like it, because it either tasted terrible or they didn’t like the feeling they got when the effects kicked in.

But it agreed with Helen, who also began to raid the family liquor cabinet when she couldn’t buy grass.

One day, when she was just past her 14th birthday, she discovered some pain killers in her mother’s medicine cabinet.

Her mom had a back surgery and was prescribed Vicodin, but only took a couple of them, leaving a nearly full prescription in the bathroom.

Even 14 year-old people can research on the internet and soon she learned that by grinding the drug and snorting it, the high was intense.

The chances for addiction were also intense and it didn’t take long before Helen was seeking that euphoric experience over and over.

The only time she felt GOOD!

It was the only time she felt good. She solicited her friends to steal drugs from their parents. Any kind of pain killer would do, but Vicodin and Oxy were preferred, and because they are prescribed so often, getting a supply wasn’t all that difficult. She also became rather cleaver, as each time she visited the house of a new “friend” she would secretly check out the medicine cabinets.

Helen soon realized that Vicodin was expensive, but heroin on the street was about a quarter the price, so see looked for suppliers. She didn’t have to search long.

The fact that a young girl can become addicted to opiates should not be a surprise. Take a look at the population in general. It is estimated that as many as 10% of Americans have at one time or another abused opiates.

It could be as innocent an act as merely taking one too many pills, or taking your pills too often, but that is still abuse. Even when people follow their doctor’s prescription to the tee, their bodies can build up a tolerance to the drugs.

Even when the original injury is healed and there should not no further need for pain management, the body still thinks it needs the analgesic. Even people who were given pain meds in the hospital may experience withdrawal when they get home.

Helen was hospitalized due to intense withdrawal and was receiving the best care. It was decided that she would not go under, mainly because opiate withdrawal causes vomiting, and that would increase the chances of death. Any rapid detox was ruled out in her case.

Her father stood there, feeling completely helpless. A nurse suggested he contact Narcotics Anonymous in an effort to learn how he can best help his daughter. He needed treatment for co-dependence to help his daughter!

Moving forward, once she was released, and out of treatment, a support group would be a lifeline to help her rebuild her life and return to a healthy lifestyle. Some material from NA helped him understand that opiate withdrawal is painful, but not necessarily fatal. It also helped him to stop his co-dependence and to learn what would truly help his daughter to recover.

While Helen was receiving exceptional care, the biggest problem that she would face in the future, as her father learned, was relapse. He must stop his co-dependence now!

Once the drug was out of her system, a return to the old dosage could be fatal. Over time her body built up a tolerance, so more and more drug was needed, but after detox and treatment, her body was getting back to normal.

The old amount was way too much and most overdoes occur right after treatment. She was going to need long-term treatment, so the group would be an important component to that. She would also need some additional medical testing, to check for depression or some other form of mental illness. Helen may need the benefit of an antidepressant.

Helen was lucky. Treatment is more effective when the heroin addiction is identified early and having a father who was willing to be taught how to stop his co-dependence.

For more about Co-dependence link to Books

Hello, my name is Mike.

My brother has been abusing
prescription pills he obtains illegally for about three years. He often
combines Loracets and Somas with alcohol. He has also abuses oxy and
heroin. I’m sure there is more I don’t know about.

Recently he
has been getting really bad. He has lost A LOT of weight and he has
mentioned that sometimes he won’t eat because it will make the effects
of the drugs stronger.

He is 22 and has been without a job for
about a year and a half. I’ve been completely open with my parents about
his problem and destroyed my brother’s trust.

Despite this, my
parents have been providing him with money, shelter, bailing him out of
bad situations, and giving him transportation or gas money.

I
will say recently they put their foot down and said they would stop
giving him money or means to for transportation, but they are unwilling
to kick him out.

The problem is they have said this before and
sure enough two weeks later they think my brother turned a corner and
they give back all his privileges.

The truth is my brother is a
fantastic liar, and my parents don’t want to accept his problem is as
serious as it is. I know he will die or end up in jail, and I’m
screaming for their help. They will not throw him out and he is stealing
their things to support his habit.

I have a seven month old
baby. She is beginning to crawl and puts everything in her mouth. My
wife wants to stop letting my brother come over to my house, and she
wants to stop going over my parent’s house with the baby as long as my
brother lives there.

She
is scared the baby may find a swallow pill on the floor. Frankly I’m
concerned for my baby’s safety as well, but I am conflicted. If I stop
my brother from coming over to my house or if I do not go over to my
parents as often to see him, I feel I might miss the opportunity to save
his life.

I caught him over dosing at my parents and there has
been times he has come over to my house and blacked out or has been
completely incoherent. I have to ask myself, what if I wasn’t there?

I’m
worn down from this. It is coming to a point that I don’t want to talk
about it anymore. What is the point? They are not listening and it is
too painful.

My wife is looking in to support groups for families affected by drug.

What are the best type of support groups with flexible meeting times, so I can go from work and vent?

How do I make my parents see how dangerous this situation and join my struggle to make my brother go to rehab?

How can I balance my life and help my brother.

Dear Mike,
You are in a very difficult position, but your
job is to be a good, loving brother. That means you have to be the
strong one in your family.

Your wife has the right idea. Your
brother will continue to slowly kill himself because other than his
death, there are no consequences.

Your parents are clueless. You
need to draw the line by not allowing him in your home, or allowing
your child to be anywhere near him. This is a good idea, because you are
drawing a line and establishing boundaries. That might help you get
your parent’s attention. He is making his problem… your problem, so you
need to work to reverse that. He needs treatment or he is going to die.
Al-Anon is a great organization and the meeting schedules are very
flexible.