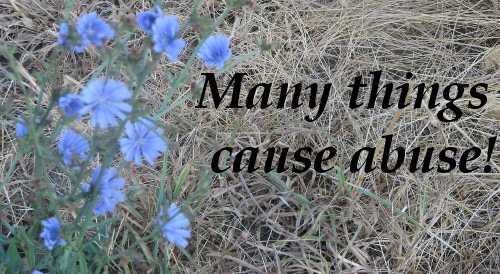 The subject of
drug abuse causes is very difficult to discuss, because everybody is different
and the underlying reasons for one person abusing drugs, while another never
even gets close to that situation are as varied as the individuals
themselves.

Before we dive into causes of drug abuse, we first have to determine what drug abuse is and give it a
working definition. Simply stated, drug
abuse includes the use of any illegal street drug, the use of a legitimate prescription
medication in any way other than its intended purpose, or even the use of any
medication beyond its prescribed frequency or dosage.

– That means taking
two pain killers instead of one is drug abuse.

– That means using a
prescription pain medication to get high is drug abuse.

Let’s also
define what drug abuse is not. Drug
abuse is not drug addiction or dependence.
The abuse of the drug is what leads to addiction, but not everybody
becomes addicted. That fact has nothing
to do with the frequency of use, or what drug they are using. Some become addicted, others don’t.

Drug abuse
causes sneak up on people. Let’s say,
for example, that a person has had a surgery to repair a knee injury and is
prescribed an opiate pain medication to control the post-surgical
discomfort.

Many physicians will do a pre-prescription assessment of
some kind to determine whether or not the patient is at risk for developing
dependence on the drug, but that assessment doesn’t mean problems won’t
arise. The patient uses the prescription
pain medication as directed by the doctor, only they still experience
pain.

Drugs like Vicodin, OxyContin, etc. are effective for
moderate to severe pain, but they are not intended for extended, long-term
use. But the patient feels pain, so
instead of taking one every four hours, they take two. Or they take two every two hours. It’s sort of like eating Oreo cookies. If one is good, two is better.

The trouble is the body builds up tolerance to the drug and
it takes more to achieve the same result.
Anyway, we have moved from the legitimate medical use of an opiate into
drug abuse.

Taking a pill for
EVERYTHING!

People often
think that they have the solution for a problem. We live in a society that is bombarded by
television messages to use drugs every day.
No matter the illness or condition, if you take a pill they say you will
be healthier.

When we take
drugs, such as pain killers, the pathways inside the brain are altered. Communication is interrupted. The pain is still there, but we just don’t
feel it. The nerve cells (neurons) talk
to each other releasing neurotransmitters into the gaps or synapses between the
cells.

Now, depending on the person and the drug, abuse is more
likely with some people than with others.
For example, I have a friend who has been living with cancer for the
better part of 12 years. He has
experienced pain and with his type of cancer pain is common. He has a prescription for an opiate pain
killer, only he rarely takes one.
Why? He has alternative ways of
dealing with the pain.

He has learned to control his pain and has adapted. I have another acquaintance with the same
type of cancer who can’t get enough pain killer to control the pain. He has been abusing his prescription, yet
gets no relief.

There are risk
factors for drug abuse. For starters,
there are genetic factors, as we are the product of our mothers and fathers,
and their parents. Children whose
parents smoke are far more likely to become smokers. If they drink, you’re probably a drinker
too. This isn’t all the time, but it’s a
factor. Drug abuse causes seem to pass from one generation to the next.

Your personality
will play into the likelihood of your abusing drugs. Curious, adventuresome people will often
experiment with drugs. That’s drug
abuse. People who are sad or lonely might take a drug to relax or feel better.

That can be abuse, but it is not necessary to include having
an after work drink to relax with friends.
However, once that after work drink turns into several and you are
impaired, that’s a different story.
Drugs can give us instant gratification. We feel good, or we feel
better.

Poor mental health
can be risk factors for abuse.

People who have emotional
problems or have a mental affliction are candidates for abusing drugs. The drug may be the only means by which they
feel normal. The drug becomes a crutch. Those with low self-esteem may use a drug to
feel better about themselves.

There can also
be peer pressure that leads to drug abuse.
Young people are impressionable and can succumb easily to this peer
pressure and abuse drugs to fit in with the crowd or gain acceptance. Peer pressure is most powerful during our
teenaged years. Kids want to be cool.

It begins as a social action, to take the drugs to be a part
of the group, to be accepted. It’s not just teenagers, as peer pressure takes
so many different forms. There is social etiquette, for example, to take a
drink during a party. “I’m a social drinker.” How many times have you heard
that? Some people actually believe that Drug Abuse causes you to be accepted
and part of the ‘popular’ group.

An overview of a
complex problem

Hopefully this
has given you an example of drug abuse causes, and in particular, the difference
between drug abuse and drug addiction.
Every person is different and what impacts one person in a negative way
may not have any impact at all on another person. Sadly, we all believe it could “never happen
to me” and that lack of awareness is what fuels the runaway train that takes us
from drug abuse to drug addiction.

Signs that your child might be a drug addict

“How did you keep this from us for so long?”

“I had no idea. How could I have let this happen in my own home?”

These are two of the most common questions we get from families of clients at our Family Workshop experience.

Sitting with all those families as they walk through the pain and betrayal of drug addiction is challenging, but it’s also one of the most rewarding elements of my job Every month eight to ten families from around the country come to Prescott to do clinical work with the addict in their family. Amid the laughter and the tears there are some common themes in the statements that family members make, many relating to not knowing that the addict was using.

Knowing the common signs and symptoms of drug use can help you with your teen. With younger people in particular, the earlier the problem is addressed the more likely that the individual can avoid permanent, life-altering consequences such as educational difficulties, negative interactions with the legal system, or in some cases serious injury or death. Keeping that in mind, here are some common signs that your teenager or young adult may be using drugs.

While it is not uncommon for teens to go through phases where they try on new persona’s, parents should try to be particularly aware of sudden isolation from family. “I’d have a couple buddies over and we’d stay up all night getting high, then I’d sleep all day,” said one client to me. “My parents just thought it was a phase.”

Changing patterns in terms of school attendance and grades will often accompany the isolation, but not always. For some addicts – particularly those who have felt confident with education and have higher than average intelligence – grades and school attendance are the last things to go.

Also important to note is a sudden onset of “allergies,” which serve as a common cover for the symptoms of opiate withdrawal, the presence and use of Visene (particularly in the car) and wearing of sunglasses at inappropriate times, such as indoors or at meals.

Change in cell-phone behaviors (normally always answer, but then don’t)

“The cell phone is at the center of drug addiction – it can be a real key in picking up an addiction” says Brain Macenroe, a recovering addict who now works in the field with young people trying to get clean. One of the most common signs, according to Macenroe, is when young people make a sudden transition from consistently taking family member’s calls to answering with text messages and avoiding phone contact.

“They get paranoid and start making up excuses as to why they can’t take or return calls. When you start to get more texts then phone calls back, that’s a big sign right there.”

Change in friends and priorities
Casey, a 21-year-old heroin user recalls some of the changes that occurred in her life when she started to get high at 17 – “I basically put people into two categories; those who could help me get high and those who were in the way. I got a new boyfriend and stopped hanging out with people who had been my friends for years and years and I stopped participating in cheer-leading and some of the other school activities I loved.”

When young people find hard drugs and become addicted their peer group will often become aware of the problem before their family does. A sudden change of peers combined with a sudden change in interests is often a strong indicator of a larger problem. After-school activities, sports, hobbies, and other things that the person was interested in will no longer seem as attractive and will often cease quickly and completely.

Silverware disappearing is common in households where heroin has been used as a metal spoon is a crucial component in preparing the drug of IV injection. Addicts will also often go through a period where things get “stolen” from them. A series of iPod’s, cell phones, computers and other electronic gadgets that can be easily pawned or traded will frequently meet with fictional mishaps that result in their need to be replaced.

This is generally a precursor to outright stealing of personal belonging from friend and family. “I stole all the gold in my mom’s house” says Chris, a heroin addict working through his fifth stay in rehab, “I probably would have taken her wedding ring if I could have thought of a way to get it off.

These are some signs/causes that might point to drug use in your home and we hope they serve you well. While we certainly don’t advocating jumping into an intervention just because some a couple forks go missing from your silverware drawer, the presences of several of these signs could be a strong indicator that there is a greater problem to be considered.

That concludes our section on drug abuse causes, please visit our home page for more or return to drug addiction effects.

Also visit Recovery from drug addiction to learn how to stop using.