Dry Drunk… Drying Out Is Not Enough 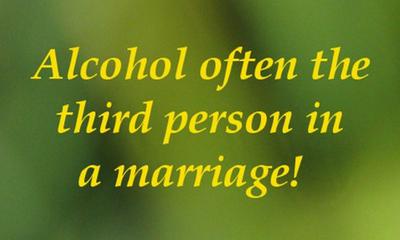 Getting sober is not the only answer to alcohol abuse or alcoholism. I say that because people think that as long as somebody isn’t drunk, they’re sober. The idea of a “dry drunk” is hard to get your hands around, but it’s the key point to understanding that just because somebody isn’t drunk or isn’t drinking, that doesn’t mean they are free from dependence on alcohol or free from their alcoholism.

Trying to get help

An acquaintance of ours talked her husband into going in for treatment for his “drinking problem,” and he traveled half-way across the country to check into a Christian treatment facility. He was there for 30 days and the final bill for the treatment was in the neighborhood of $100,000.

The wife said she had enough of his drinking and according to her story she connected with an interventionist to begin the process of forcing her husband to stop drinking. He had been in and out of treatment for 20 years and the marriage had been on shaky ground for some time.

They had been to counseling, but nothing was ever resolved. The husband was a very successful businessman, who owned five companies, three houses and according to friends lavished his wife with money trying to please her. He had come from a wealthy family and denied any problem with alcohol.

After not having a drink for 30 days, the husband came home and immediately began drinking again. Why? The addiction was still there. He still had the cravings for alcohol and the 30-day period did nothing to change the addictive cycle.

He received treatment, but he never went into recovery, he became a VERY angry “dry drunk”.

I suppose he spent all that money just to get her off his back. She wanted him to change his ways, but she never received any treatment herself. The only thing that changed was he didn’t have a drink for 30 days.

The beauty of the Alcoholics Anonymous 12-Step program is that it helps people changed their lives. It’s not just abstaining from alcohol, but a holistic approach to managing the disease of alcoholism.

He agreed to change but didn't really embrace his change, he was compliant.

Christian treatment for alcoholism can be very powerful and effective, but the alcoholic cannot continue in denial, cannot merely acquiesce to the demands of a spouse, or just go through the motions of receiving treatment and expect that anything different is going to occur.

The words of Christ are quoted in Revelation 3:20,

“Here I am! I stand at the door and knock. If anyone hears my voice and opens the door, I will come in and eat with him, and he with me.”

Do we have a changed HEART!

It is not the number of times one goes into treatment, as we can all fail and need additional help, it’s the willingness to accept our situation, accept the help and most of all surrender to God, as we understand him. This fellow may have been in and out of treatment for 20 years, but it is sadly obvious that a major “disconnect” has been going on in his life.