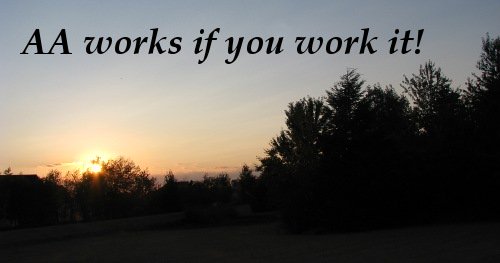 Alcohol and/or Drug Addiction is a horrific and lonely disease!

This certainly applies to addiction and alcoholism, they are difficult. Recovering from drug or alcohol addiction will probably be the most difficult process that the addict will experience in their entire life.


AA is a comprehensive process

Alcoholics Anonymous (AA) tries to address this difficulty with a comprehensive process called the 12 step program. Many people have heard of the 12 step program, but few actually go through the steps and gain the full benefits of the program. Why? Why wouldn’t someone, who is trying to stop killing themselves with a drug, not want to walk through a PROVEN process that’s likely to help them? Doesn’t make sense?

Put another way, why doesn’t every addict go to Alcoholics Anonymous? It’s available almost everywhere, it’s free, there are meeting times every day of the week and the meetings are easy to find on the internet. Most of all many, many people have been freed from addiction using this program!

Our natural state is “entropy”.

I think Peck hits it right on the head when he postulates that the natural state of humans is something called “entropy”, laziness and fear of change. We’d rather stay where we are at now because it is known then venture into the unknown. People don’t go to AA because of fear of change. People stay addicted to drugs and alcohol because of fear and laziness.

AA’s 12 step program is set up to break through our natural tendency toward resisting change. The steps walk you sequentially through a program that, if worked, will allow the addicted person to grow spiritually, maybe for the first time in their lives. AA does not advocate for any specific religion, but we are all body, mind and spirit and so the spiritual; component of recovery is an important key.

Spiritual growth has got to be the primary goal of addiction recovery because it is the only PROVEN method that supports long-term recovery. Every psychiatrist, physiologist, counselor, treatment center and pastor knows this. That’s why almost every treatment protocol includes a 12 step program for the addict and everyone in their family.

Everyone has a good excuse not to do 12 Steps.

I meet with patients all of the time who are addicted to drugs and/or alcohol. I STRONGLY recommend they go to Alcoholics Anonymous (AA). I give them the list of local meetings, I tell them which are the best for them, I recommend that they go to 90 meetings in 90 days and I tell them it is the most critical component of their recovery.

Almost none of them go. There are always lots of excuses… They don’t like the people, the building, the time, etc. etc. Sadly, one of my patients is now dying from the disease at 46 and still totally refuses to go.

Spiritual growth is HARD, so the 12 step process is hard. We have to face our moral short comings and admit what we’ve done wrong. Who wants to do that?

What AA understands is that addiction recovery is ONLY possible in the context of spiritual growth, which can only be attained with HARD work.

The goal of Alcoholics Anonymous (AA) is GROWTH. Everyone in AA says “Growth is the goal”. “The steps work if you work them”. You need to accept that you’re powerless, embrace your higher power, confess your moral failings, make amends where possible and help others who are struggling. If you do that you can stop your addiction.

If you are addicted go to Alcoholics Anonymous (AA)!

Most Try To “Go It Alone” and FAIL!

One alcoholic told me that the only way for him to get clean was for him to do all of the work, there was no other way. What he was not considering is that as human beings, we are not wired that way. We are wired for relationship. We are not meant for isolation.

Moreover, what if I told you that you can’t do it all on your own strength, that you need something from somebody else? The Alcoholics Anonymous 12-Step process for recovery was first created in the 1930’s by alcoholics who had tried the alternative methods but failed. , Over the last 70 plus years, over 250 self-help groups have adopted these steps.

Why? Because they work!

It is easier said than done, because the individual has the power at all times to completely shut down the process. There is a type of discipline that is required; not so much the stick to it discipline that an athlete has when preparing for competition, but a kind of willingness to allow the process to move forward, however slowly, resulting in a remake of the individual.

Some Others may use these steps, but they add on religion and turn the original intent into something different. Look for groups that spend the majority of their time on the steps. Don’t get caught up in the social aspects because you’re likely to drop out because it won’t help you.

Alcoholics Anonymous usually takes much more than a year.

It is not uncommon for people to spend at least year or more on an individual step, mainly because they cannot get past themselves. When they face themselves in the mirror, it may be overwhelming and the process is shut down. “Oh, the 12 Steps didn’t work for me.” They are, of course, right because the process was stopped.

The “Big Book” is the basis for the 12 Step program and you get download it for free on the Alcoholics Anonymous website.

Get a copy of the book and read it cover to cover multiple times. It explains why the 12 Step process works and why you’re so addicted to your drug of choice.

Go To Several Meetings Before You Choose

You need to attend a few different meetings before choosing which one is the best for you to attend, and then only attend those that incorporate the 12 Step program and stick to the original; by the book.

Alcoholics Anonymous:
Other Methods May Work For You

There are other methods, good methods, so praise of the 12 Steps does not exclude an appreciation and respect for programs that render solid results. But like the Big Book says, overcoming a substance use disorder may require a spiritual solution (Page 44), and so the 12 Step program can offer an amazing journey for the one willing to walk that path.

When I was a child I dreamed of playing professional baseball, but never got past pitching middle relief on my college team. Some kids never get to play in high school, so I was successful on one level, but I never achieved the goal. Had I known about steroids back then, would I have been tempted to cheat the system?

In treatment and recovery some people want to cheat the system by choosing the easiest possible program. Have you ever been behind the scenes and seen for yourself the torture that a professional athlete goes through in preparation for competition? It’s really no different from what an addict/alcoholic must do to reclaim their life and give them a chance for a bright and productive future.

1. We admitted that we were powerless over alcohol–that our lives had become unmanageable.

2. Came to believe that a Power greater than ourselves could restore us to sanity.

3. Make a decision to turn our will and our lives over to the care of God, as we understand Him.

4. Made a searching and fearless moral inventory of ourselves.

5. Admitted to God, to ourselves, and to another human being the exact nature of our wrongs.

6. Were entirely ready to have God remove all these defects of character.

7. Humbly asked Him to remove our shortcomings.

8. Made a list of all persons we had harmed, and became willing to make amends to them all.

9. Made direct amends to such people whenever possible, except when to do so would injure them or others.

10. Continued to take personal inventory and when we were wrong, promptly admitted it.

11. Sought through prayer and meditation to improve our conscious contact with God as we understood Him, praying only for knowledge of His will for us and the power to carry that out.

12. Having had a spiritual awakening as the result of these steps, we tried to carry this message to alcoholics and to practice these principles in our affairs.

Alcoholics Anonymous is well worth your time and effort because if you work it… it works!