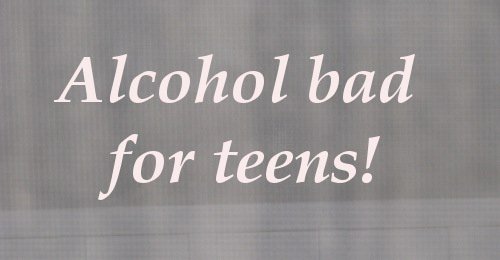 The mother of a
teenage daughter was talking to friends.
The conversation was light hearted, but mom said something very
telling. She laughingly explains, “My 17
year-old wants me to buy her a six pack of beer when I go to the store.” The others laughed along, but the truth is,
the daughter actually did make the request and mom was happy to accommodate the
request, but she of course wanted her daughter to drink it at home and not go out
with it. True story.

Parents do not
necessarily understand that by allowing their children to drink, even under
their supervision, they are inviting disaster.
Children and alcohol do not mix. Statistics clearly show that children
who are allowed to drink as teenagers are far more likely to develop the
disease of alcoholism than those who wait until the legal age of 21 to take
that first drink.

Parents will likely argue this point, because they know
what’s best for their kids, and who am I to tell them differently? Alcoholism in teenagers is not something they need to worry about.Police are called by a neighbor, who
complains of a noisy “beer party” doing on next door. High school kids are gathered with a keg and
having a good time. The police do not
enter and essentially do nothing mainly because mom and dad are there and
“supervising.”

Teens are
naturally curious and that leads to some potentially destructive behavior. Peer pressure comes into play, as kids want
to fit in and be a part of the crowd. But
it’s not just teenagers, as kids in their pre-teen years may engage in risky
behavior as well.

The major concern with alcoholism in teenagers is the fact that the teen brain is
still developing and will not be fully developed until the individual reaches
early adulthood. The last part of the brain to develop is the frontal lobe,
where logic and proper choices are made, unlike the back portion of the brain
where coordination is regulated. That is
why a teenage male can be a “man child” who is capable of amazing physical
feats, yet has little emotional development and can’t handle the pressures of
being an adult.

A DISEASE of the
brain

Alcoholism is a
brain disease and so it is not a huge jump to conclude that introducing alcohol
to a teenage brain is not a good idea. Add to that the poor diet of teenagers and
other negative environmental factors, such as child abuse or neglect, and it is
easy to understand why a teen is at risk if allowed to consume alcohol.

Parents need to be vigilant to help avoid alcoholism in teenagers. Parents need to be parents, not buddies or
social peers. Teens need consistency,
honesty and a loving, supportive hand.
Prevention of teenage alcoholism begins at home and the responsibility
lies with parents.

Most commonly,
parents don’t listen. It’s not that they
don’t want to listen, it’s that they don’t have listening skills. Listening means not talking and parents like
to instruct, lecture and direct, not necessarily listen.

Teens need to be heard, not merely listened to and that
means being patient and allowing them to take their time, free from
interruption and allowing them to fully express themselves. Understand that this can be a difficult
process, as teens aren’t always open to sharing with adults, especially if they
suspect you’re not listening.

Watch the signs of alcoholism in teenagers!

Watch for the
signs. If your teen has been using
alcohol, or some other substance, there will be evidence. Perhaps they have experienced some mood
swings, other than the usual eye-rolling and rebellion that is expected in some
measure. But when those mood swings, or
changes in attitude get in the way of completing homework assignments, or
result in a lower grade point average, that’s a sign something is wrong.

Sadly in alcoholism in teenagers, the alcohol wins

Alcoholics,
teenage or otherwise, will become slaves to the disease. Your teen might start to steal money, or run
afoul with the law. They may be asking
for money, but they never have anything show for it. They may sleep too little,
or too much, even for a teenager. Look for changes in their eating habits. They may lose weight, or they may experience
tiredness or fatigue. If they avoid
their parents, that’s a huge sign.
They’ll go to their room, or keep from seeing other people.

The younger they
start the worse it is

The younger a
child is when they take that first drink, the more likely they are to develop
alcoholism. Boys usually have their
first experience with alcohol, usually beer, when they are 11, while girls have
their first drink at 13. Almost half of
all 14 year-olds have had a drink, and by the time they are 15 that’s when just
about all of them have had something.

The ones who drink on a regular basis by age 15 are in
serious jeopardy of developing the disease.
Specifically, a 15 year-old that drinks is five times more likely to
become an alcoholic!

Most fatal
traffic accidents have an alcohol component, and for teenagers, auto accidents
are one of the leading cases of death, along with suicide and homicide. Think about that—alcohol, suicide and
homicide. Alcohol is also a gateway
drug, like tobacco. That is, teens may
start with alcohol and cigarettes, but move to marijuana, and other illegal
street drugs.

As frightening as it is to realize that a teenager is so
vulnerable, take heart because there is hope.
There are excellent resources for parents and treatment centers that
will help restore your teen to health and vitality.

The best defense
is a good offense. Parents can take the
lead and set the tone for their teen son or daughter. By being watchful, understanding behavioral
trends, paying attention to details, parents can keep on top of any potential
problem with their kids.

That completes our page on Alcoholism in teenagers, visit our home page for more information.


Admitting to my alcohol abuse.

I started drinking innocently in high school when I was 17 years old. It was everywhere, and the
“in” thing to do. I noticed the buzz it gave me and added to my self
esteem. — Through the years my drinking escalated. I’d say I realized I
had a problem in my late 20’s, but just continued to drink.

I
still have self esteem issues, and drink heavily–not every day. I can
easily down 2 bottles of wine. I hate that I have to have it to feel
better about myself, but the hang-over’s and depression that are created
from alcohol are horrible side effects. I envy people that are just
social drinkers. They can enjoy 2 or 3 drinks then stop. I wished I
enjoyed life without alcohol.

I have never gotten treatment, but one of my doctors who I see for depression thinks I drink to “self medicate.” He’s right.

Any advice is appreciated. — I work full time, and I’m now 56 years old.

4/6
Hi-
Thank you for sharing your story. I can
definitely relate with you. I started drinking when I was 16 and drank
until I was 28. At first it was with friends, partying or going to a
bar. I ALWAYS got drunk when I drank. Over the 12 years it just kept
getting worse. Eventually I drank EVERY night by myself and
occasionally with friends.

I wanted to quit when I was 28 because
I had a son (I didn’t drink while I was pregnant). I tried but kept
going back to it, although I didn’t get drunk every night – just drank
some. It had become an addiction. I went to my medical doctor and he
was great. One of my biggest fears was not being able to sleep if I
didn’t drink at night. He gave me a non-addictive medicine to help me
sleep and told me to go to Alcoholics Anonymous meetings. I did go and I
also got a drug and alcohol counselor. Now I haven’t had a drink for 25
years.

Now I go mostly to Al Anon meetings (for friends and
families of alcoholics and drug addicts). That is because my son has
been having trouble with substance abuse.

Both meetings helped
immensely because I realized I was not alone with these two problems.
Also, it is great to talk freely and hear others be so open.

I
greatly advise that you go to an Alcoholics Anonymous meeting and
perhaps talk some more to your medical doctor. Also, you could get a
drug and alcohol counselor and talk to a clergy. YOU ARE NOT ALONE.
Please get some support. I will pray for you-Lynette