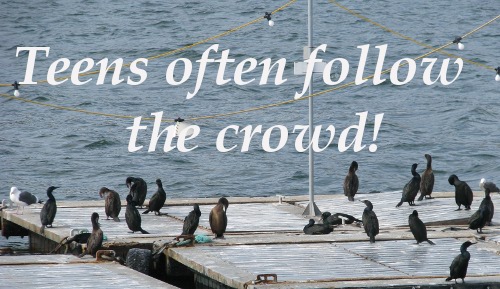 We all have an image of the kind of kid that gets into trouble with drugs. They are the kids from the “other side of the tracks,” or those who are a little out of step with the natural flow of high school culture, or they are the “bad kids.”

These stereotypes are all commonly offered by adults trying to get their hands around the drug problem in their community. Allow me to paint a different picture.

Troubled teens may be living in your house and you don’t know it.

Troubled teens could live in your house. They participate in school plays, play in the band, score touchdowns on the football field, or excel in mathematics competitions. They are the boy and girl next door, the kids who were brought up the right way by the right kind of parents.

The divorce rates are high, so it has gotten to the point that at least half of the kids are from broken homes, bouncing back and forth between parents, the new boyfriend and as a result are left to figure out life by themselves.

Divorce is a curse on children, a kind of emotional death sentence that is pronounced on the day dad finds a younger woman. It is the beginning of an emotional roller coaster that begins the day mom decides she doesn’t love dad anymore.

Our courts make it so easy to rip families apart. Divorce is common place, so much so that any marriage that lasts more than a few years is the exception to the rule.

Teens don’t necessarily choose to share their feelings, nor are they necessarily capable of fully articulation their emotions, but they are susceptible to thinking that the momentary relief they think they receive from drugs is an acceptable way of dealing wit their circumstances.

OK, maybe there is no divorce involved, but why would Johnny turn to drugs when he has so much going for him? Mom and dad may be successful people and Johnny has every privilege, so why isn’t that enough? I see this all the time. So often Johnny is never told “no” and has never earned anything.

He does well in school, which is important, but as long as the grades are good, mom and dad are satisfied. As a football coach I see these kids a lot. They want discipline and structure. Even when we go through our rigorous conditioning drills, they respond favorably because they want to be led.

Then there are parents on the other end. A special education teacher told me the chilling story about a high school freshman girl he was trying to help. She was failing all of her classes and he wanted to talk to her parents. There was no father, so he called mom to tell her the situation and to try to come up with a plan to help the girl.

He told me that every sentence included the “F” word and the woman screamed at him, cursing him at every turn. He told me, “At risk kids may want the help, but when their parents have that attitude, there is little we can do.”

Teens in trouble are in all types of homes and communities.

Troubled teens come from any kind of home, in any community. For a variety of reasons, and peer pressure may be at the top of the list, they make bad decisions that can lead to drug abuse and dependency.

It usually starts with alcohol or marijuana, but reports of heroin, cocaine and methamphetamine use are by no means remote. Think of it this way, Mexican drug cartels exist because American kids buy drugs. Put aside the stereotypes for a moment and understand that any kid can get into trouble.

There are parents who try to keep on top of their children’s activities, and who have done everything to try to show them a proper and healthy way to live. They are proactive and understand that public schools and even private, religious schools, can be the marketplace for a variety of deadly substances.

So many teachers I know feel isolated, frustrated because they see the situation for what it is and can’t get through to parents. Some parents deny that their child would ever do “something so stupid,” and some parents blame the schools and the teachers, claiming “It’s their responsibility to teach our kids.”

We live in a society that believes there are no absolutes, no objective truth. Everything is relative. If it feels good do it. This is where teens get most of their bad ideas. We are a secular nation and so only secular solutions are allowed to be discussed.

It’s hard enough to be a teenager, but pile on broken families, drugs, sex and no values and you have a recipe for emotional stress.

Teens are hard-wired to rebel. It’s part of the experience. Teens will be teens, which is why adults have to be the adults.

Even in a perfect world, some teens may fall into the Troubled Teens category, but in the absence of traditional Judeo-Christian values, or the anti-drug teachings of Islam, where is a teen going to turn for counsel?

How can divorced parents claim any moral authority? Many troubled teens are caused by a divorce and the teen is left to fend for themselves.

How can a parent who curses a teacher for caring and trying to help, have any right to judge the school system?

The best start to find a solution to the problem of troubled teens is to love them enough to make the tough choices.

For more about Troubled Teens link to Books

Hard to believe isn’t it? I come from a wealthy loving home. I was a
cheerleader, but what cheer do i have left now? I started using after my
older brother/best friend was killed in a car accident.

You
would think that a little something to take the edge off wouldn’t hurt
anyone, right? Peer pressure and a little morphine could turn the
prettiest most popular girl into me!

A few weeks ago, I had sex
with a junior in high school for $100. Addiction turned me into someone I didn’t recognize. I’m 13. Wow. Wasn’t that a happy little story? Right now I’m in
rehab and recovering slowly. But I feel a lot better and all I had to do
was talk. I talked to my mum, she cried a lot then called a treatment
centre.

Drugs started out cool then turned into your worst
nightmare. As the wise man once said, “the road to hell was paved with
good intentions”. That’s the case with morphine a painkiller used for
“fun” turned into a fatal chemical.

All I feel like saying is, don’t turn to drugs to take your mind off your pain because it ends up
hurting a lot more then it did before.