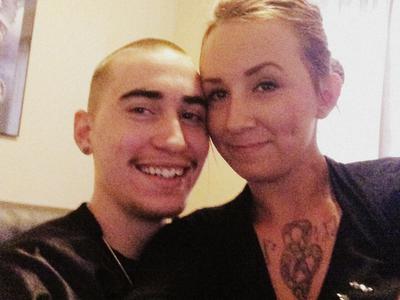 Hello , my names Bethany. I'm 19 years old I'll be 20 next month. Lets start off by saying my mom was and still is a drug addict and my dad as well but he's in prison so I don't really know to much about him .

But I have 2 older sisters that would make me the youngest. I mean I never expected myself to do drugs EVER. Just because the fact my mom did them && my sisters followed her. I was the only one that haven't done it yet. We lived in this 3 bedroom town house in Mesa Arizona , that's where we are from. It was a nice town house at first not to much company, then my mom's boyfriend got out of jail and of course she let him live with us and we were on section 8, Housing. No man was allowed to live there, but he did.

Ever since then everything went down hill. I mean my mom & my sisters were getting high together, I would always run away because I hated being there, I wasn't a addict yet. So I didn't like to be around them , it's like all my family were or are still a drug addict.

I would go to my so called boyfriends house at the time, I was 15years old when it took place. After I would run away my mom would call and put me on the runaway list all the time & a few years before all this my sister, got caught stealing from Walmart and she used my name so I had a warrant because she didn't tell me about it. I'm 15years old at the time not going to school always going to parties and doing Ecstasy, doing alcohol, smoking weed doing a lot of coke .

Once I ran way my mom had no idea where i could even go if she cared to go look for me. I was doing all that, passing out only God knows where.

I was really bad on Ecstasy and coke, by the time I was 16 I was doing Ecstasy a lot more me and my friends would always go to raves. Poping pills like they weren't going to kill us . Then I met this friend ' Veronica ' she was kinda on the easy side. I liked her so much, she was so pretty I loved how she did her hair & makeup, she had a really nice body. The thing I was most jealous about, is she had a mom. A mom that really cared for her, did everything for her had a nice house, nice car, my mom didn't even have a car. She was spoiled and she didn't even appreciate her mom, she was worse then me.

We would always runaway a lot together wouldn't come back for weeks at a time, by the time it was my 17th birthday me and ' Veronica ' were chilling we were trying to get some Ecstasy or some coke, or even weed. Nobody was answering their phone, so my so called friend 'Veronica' was like Bethany let's just do your moms drug, which was ( Meth ). I'm like Veronica, no you know what that does to you, she said yes I've done it before, you'll like it she said. I asked her if she was sure, she said yes multiple times.

So that made me kinda wanna do it. I thought my mom's doing it, my sisters' are both doing it. Pretty soon I'm going to try it for the first time! Worst mistake I've even made, so I went to my mom's best friend at the time ' Heather ' I asked her for some ' G ' is what we called it. She gave it to me, no hesitation. I walked back into my room with the ' G ' and we broke it down and sniffed it up our nose. We were so High, I thought she was right I did love it. That was my first time doing it, but it definitely wasn't my last.

after all that, that's the last time I've ever seen ' Veronica ' she started doing Meth just as bad as Me. we both got really addicted, but went our own way. I started hanging out with people that did, everyone I met only smoked it, I sniffed it. Every time I would try to smoke it I would gag and always throw up. But sooner or later, I learned how to smoke it and became really good at it.

Then i met my husband ' Kenneth ' I'm with now , I was all methed out and he did heroin, not that i knew he did heroin. i didn't really know to much about hardcore drugs, like heroin, meth, and other ones that change you.

I was doing Meth for about 3/4 months before I meant, Kenneth. I would bring him to my house and my mom would tell me, he does heroin he's all dodding out. I looked up heroin, found out a lot about it & my mom was right. But even me and my mom and both of my sister started getting high together, all of us were passing the pipe to one another.

But I kept asking Kenneth if he did heroin he said no, no, & no every time. he told me it was zannies and I believed him, cuss he was so different from other guys I've dated someone so sweet && nice, he was the sweetest EVER.

But me && Kenneth last the drug life , me 3 almost 4 years, him he was doing it for quit awhile. But he was being stupid and got caught with heroin on him , and went to jail.

Sooner or latter I simply became okay with him doing it.

We were together for 2 years getting high, but when he got caught with the heroin, his mom and dad wanted to take him back to New Mexico where he's from and send him to rehab, which I was okay with because he got so bad in his addiction. I believed in him , he said he would come back to me and all. He goes out there gets a whole bunch of charges and goes to jail for about a year. and

I'm still in Mesa Arizona, trying to find a way to get sober for Kenneth, because I thought he was getting sober. So I thought I'd get sober to. But to make a long story short, we are both sober now && I live in New Mexico now (:

I've been sober for 15 months on the 5th of November , but the only sucky part is my family ain't here, one of my sisters, the oldest one Danielle got sober a few months before i did.

My other sister Alex , shes worse then ever , she's now on Heroin, and I don't know what to do for her, she doesn't even talk to me. I call/text and she never answers , I went and tried to say goodbye before I moved out here. She wouldn't even open the door, and as for my mom she's still the same old ' Arlene ' my mother . She's still getting high more then ever.

I have faith, I have hope, & I do believe they will find a way, but I hope it's before it's to late. I miss them so much, God bless every recovering addict who made it in && out.