Poverty and addiction are they related? 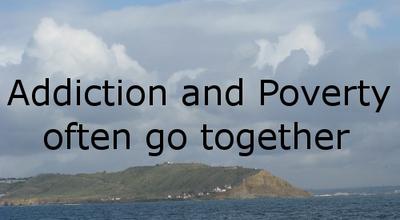 Poverty can be a contributing factor, especially in situations where someone uses drugs, or drinks to “feel better” about life. You have heard about drowning your sorrows. Addiction is not necessarily a result of poverty, but it can cause poverty, as a person slips deeper into the addicted lifestyle and throws his/her life away.

I know many successful, professional people who have wound up with nothing as a result of their habits.

Poverty can cause addiction to get worse, mainly because a person may not be able to afford treatment. They have no insurance and any kind of serious treatment program can be expensive. Poverty can also beat the human spirit into submission, bringing on emptiness and feeling of futility, leading to a person turning to anything to escape the reality.

I got the following from the National Institute on Drug Abuse: “Research has shown that individuals whose lives are marked by poverty, illiteracy, malnutrition, and other unhealthy environmental conditions are also at high risk for drug abuse.

These individuals, as well as those in minority populations, are also at increased risk for many of the diseases associated with drug abuse, such as hepatitis.

NIDA is intensifying efforts in all areas of its research portfolio, including basic, clinical, and epidemiological research to increase our understanding of the link between drug abuse and various diseases that predominantly affect under served populations so that we can develop treatments, interventions, and prevention programs that are gender, age and culturally relevant to these populations.

A special feature of the Clinical Trials Network will be its ability to recruit large numbers of subjects from very diverse background and locales. This will provide a particularly useful vehicle for analyzing some health disparities issues. NIDA is also expanding its efforts to increase the number of scholars from underrepresented groups participating in drug abuse research.”

Not the major factor

That is how I see poverty, drug addiction and alcoholism. Poverty is a contributing factor, a significant one, but not the major, determining factor in a person slipping into addiction. Otherwise all poor people would be addicts. Would it then be true that no rich people are addicts?

Addiction has a huge spiritual component, as the drug of choice takes over the human spirit and squeezes the life out of it. It would be too easy to point to poverty and lay the blame there. Human beings, from every walk of life, suffer in some way, some as a result of their own behavior, others as a result of mere circumstance.

The Bible teaches that the rain will fall on the righteous and the unrighteous, basically saying that we’re all in this together. How does one respond to poverty? Are they the victim or the victor? Jesus of Nazareth said “In this life you will have trouble.” There is no escaping life, and for some that means poverty. It is not a death sentence.

How do they cope?

How do people react to adversity and how do they cope with problems? That is probably a more significant path to follow when examining the question. Poverty may not have been their choice, but how they respond to the situation is rather telling.

Sometimes the situation is dire, as job losses in recent years have ripped apart hard working families. Some, if they are lucky and industrious, find another position, while others, regardless of their experience and qualifications, find nothing. They can either press on, or look for something to numb the pain.