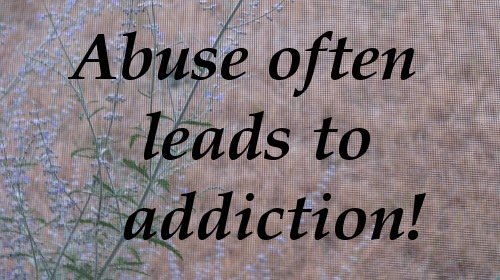 The second step in the Alcoholics
Anonymous 12 Steps is rather telling—“Came to believe that a
power greater than ourselves could restore us to sanity.” While
the diseases of addiction and mental illness are two are separate
issues, they are not mutually exclusive. In so many cases, where
there is one, the other is there also.

Let’s deal with the AA assertion that
a power greater than ourselves could restore us to sanity. Keep the
religious element out of it and just look at the sanity part. A
person has been using his/her substance of choice for some time, be
it alcohol, or cocaine, or heroin, and their habit has gotten to the
point where they no longer have control over when they use, how much
they use, or even whether or not they want to use.


Why don’t they stop?

The first step said “our lives had
become unmanageable.” Unmanageable has turned into insanity. Why
else would somebody continually do something that is so obviously
harmful to their health and well being? They insist on using, even
though family and friends have begged them to stop.

Everyone sees what is going on,
everyone knows the dangers, everyone fears for their very life, but
they persist. They know better. Everyone else is wrong. Left to
their own devices, they will surely die. That is the end game of
heroin addiction—the user is dead. Alcoholics can literally drink
themselves to death. This is not about substance of choice as much
as it is about the insanity that the substance creates.

In order to clear the fog from the
user’s brain, they must be put in a safe place and taken off their
drug of choice. This detoxification process is necessary to get the
drug out of their system and allow for treatment to begin. The most
important aspect of treatment is the addict’s ability to comprehend
reality, make an intelligent, informed choice and work at recovery.
They can’t do it on drugs.

Recovering addicts have remarkable
stories about how they escaped the clutches of addiction, and they
look back at their time in slavery and lament what that did to their
friends and families. They wonder how it got so crazy.

Alcoholism/drug addiction robs its
victim of reason and sanity, and what was once a bright, intelligent
and rational person has been transformed into a bottom-feeding
parasite. It’s not what they set out to do and it certainly isn’t
what they wanted, but over time and under the right conditions, it
happened.

Addiction in and of itself is a form of
mental illness. It’s not just a bad habit that has gone too far,
it’s the absence of choice, as the individual is no longer in
charge of his/her life. The drug owns them. Just as a person with
bipolar disorder cannot regulate the extreme emotional swings in
their life, an addict cannot say no to the drug.

In so many cases, where there is
addiction, there is also mental illness. People might cringe at the
thought of mental illness, as there is a stigma attached to that
condition, so for sake of illustration, let’s focus on something
very common—depression. Instead of a long, clinical explanation of
depression, let’s limit it to feeling “blue,” or just being
down. That’s easy.

A person comes home after work. It’s
been a long day and they’re tiered, worn out from the boss
complaining to them, coworkers blaming them for their own mistakes,
and the person in the other department has dropped the order that
should have been shipped that day.

It’s time to relax and unwind.
They fix a drink. That’s so common that we don’t even think
about it. It’s no big deal because millions of people do that.
The problem is they use a drug, in this case alcohol, to help them
deal with the problem. There is a pleasurable and immediate result.

The problem isn’t going away, and the
psychological impact on a long day at work isn’t being processed
effectively, but for the moment they feel better. They even feel
good. People who have “the blues” tend to gravitate to alcohol,
because it calms them, relaxes them and they feel “better.”

But
what if the alcohol fuels the depression? What if alcohol causes
someone to go from feeling stressed to feeling angry? You can blame
their behavior on the alcohol, because everybody knows that old
Harvey here is a mean drunk. But what is Harvey really experiencing?

Harvey did not choose to be depressed.
He may have allowed his depression to fester, but he surely didn’t
ask for it to come into his life. He did, however, chose to take the
drink. That may seem unfair, because one person, depressed or
otherwise, can take a drink, even many drinks, and never become an
alcoholic, while Harvey has one or two and he’s in trouble.

It’s a sticky situation, because
addiction has that element of self-infliction. If Harvey has morphed
into being an alcoholic, because over time he drank more and more to
chase the blues, he is going to need treatment. Obviously, Harvey
drinks so they want to deal with that, but the operative question in
so many cases is simply “What hurts?” There is a co-morbidity at
play, that is two things that are going on at the same time.

A treatment center can dry him out, but
all you have then is a dry drunk, because they haven’t dealt with
the depression. Harvey’s solution was to drink, but he has now
come full circle and is back to his emotional regulation issues.

Connection between Addiction
and Mental Illness

Chicken and egg issue? The national
Institute on Drug Abuse (NIDA) says that there is a relationship
between drug addiction and mental illness. Mental illness can lead
to drug addiction, especially when the person will “self-medicate”
and try to relieve symptoms by using a substance.

If a mental
illness is already present, or even dormant, drugs can exacerbate the
condition. The conditions may both stem from a common origin, either
because the person is predisposed to the illness, or they may be more
vulnerable than others, or their brain is just wired to respond to a
certain drug in an extreme way.

The danger to the person who is
afflicted with both mental illness and addiction is the danger of
their not being receptive to treatment, or unwilling to comply to
treatment programs.

If they have a history of psychosis,
there is most likely a wide path of emotional damage in their
relationships with loved ones and friends. Co-morbid patients
require a comprehensive treatment program, one that deals with the
substance and the root cause of their suffering. The dangers of not
getting treatment are obvious. Left unchecked, either the mental
illness or the addiction will harm the patient.

MANAGING THE FEAR AND ANXIETY OF THE UNKNOWN

All most everybody worries about what will happen in the future.
The prospect of not knowing if something good or bad will happen to you
in the near future can produce a lot of fear and anxiety. As a result,
here is a list of techniques and suggestions on how to manage this fear
of dealing with the unknown.

Remember that no one can predict the
future with one hundred percent certainty. Even if the thing that you
are afraid of does happen there are circumstances and factors that you
can’t predict which can be used to your advantage. For instance, let’s
say at your place of work that you miss the deadline for a project you
have been working on for the last few months. Everything you feared is
coming true.

Suddenly, your boss comes to your office and tells you that
the deadline is extended and that he forgot to tell you the day before.
This unknown factor changes everything. Remember that we may be
ninety-nine percent correct in predicting the future, but all it takes
is for that one percent to make a world of difference.

Learn to take one day at a time

Learn to
take it one day at a time. Instead of worrying about how you will get
through the rest of the week or coming month, try to focus on today.
Each day can provide us with different opportunities to learn new things
and that includes learning how to deal with your problems. When the
time comes, hopefully you will have learned the skills to deal with your
situation.

Sometimes, we can get anxious over a task that we
will have to perform in the near future. When this happens, visualize
yourself doing the task in your mind. For instance, you and your team
have to play in the championship volleyball game in front of a large
group of people in the next few days.

Remember
to take a deep breath and try to find something to do to get your mind
off of you anxieties and stresses. A person could take a walk, listen to
some music, read the newspaper, watch TV, play on the computer or do an
activity that will give them a fresh perspective on things. This will
distract you from your current worries.

A lot of times, our
worrying can make the problem even worse. All the worrying in the world
will not change anything. All you can do is to do your best each day,
hope for the best, and when something does happen, take it in stride.
If you still have trouble managing your anxiety of the future, then
talking to a counselor or clergyman can be of great help. There are ways
to help manage your fear and all it takes is some effort to find those
answers.

Stan Popovich is the author of “A
Layman’s Guide to Managing Fear Using Psychology, Christianity and Non
Resistant Methods” – an easy to read book that presents a general
overview of techniques that are effective in managing persistent fears
and anxieties. For additional information go to: