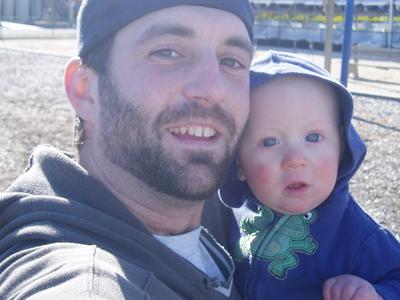 Taken 2 days before he robbed a bank

My name is Heather. I would love to share my story with you. I feel that people need to understand addiction and how it affects not only the addict but their loved ones. There is a very poor understanding and condescending feeling towards addicts, which I feel only holds them down more while they are trying to recover.

When I met my husband, Jeff, he was a successful Executive Chef at a great restaurant (he later became a part owner), a volunteer firefighter, and just a great outgoing caring person. We both worked in the restaurant industry. People in this industry tend to drink and maybe do various drugs a bit more than other industries. Jeff had been in the industry for almost 20 years- he moved every year or more often to try and start over and get away from those various pressures and basically run away from his addictions- he did that for most of his career.

We were friends at first and its kinda a cute story of how we got together but I'll stick to the addiction part of the story.

After dating for a while I knew he had issues and at some point after getting him to stop cocaine I guess he started taking Oxycotin. I threatened to leave a couple times but with his promises of I’m gonna stop soon, the fact that he was functioning at a very high paying job, and with oxy you can’t really always tell when they are using so I didn’t know how bad the problem really was.

Several months after we got engaged he got in trouble at work for being high and was given a leave of absence of a month or so and hired back at a sister restaurant. We tried to get him into a rehab but oxy is expensive so we didn’t have enough funds... and we made too much money to get him into a free bed somewhere.

So I took care of him as he shook and threw up for several days while he was detoxing. And from there I thought we were done. He worked that summer getting drug tested every couple weeks and he was passing them all and everyone was so proud and happy for him (Did you know there is something you can buy at a drug store so you can pass a drug test; apparently he was given enough notice before the drug test so that he could get this stuff).

I didn’t know all this till months later. So all summer I planned our wedding and worked at “our restaurant” which I was so proud of because I felt like I partly owned it too. We were married on the beach on Long Beach Island we had our friends and co-workers cater the affair on the bay at a yacht club.

2 months later we were both fired from our jobs on the same day because he refused to take a drug test- but that’s not what he told me.

1 week later I found out I was pregnant. We struggled all winter and I couldn’t get hired anywhere the following summer because I was due in August- the busiest month at the shore. Jeff was given another chance at another sister restaurant and worked the whole summer until he “burned out” (what he said happened) a week before our son was born. He was born with red hair and we named him Kylan- Gaelic for warrior.

At this point I just focused on the baby. Jeff did 1 week in a rehab in October- we had insurance and this was still all we could afford. I stayed with his parents in Massachusetts because ky was a little over a month and I needed some help taking care of ky for that week.

Once again I thought he was doing great and I would constantly search for pills and make sure he had no money and try my best to keep my eye on him and ask him every day what he was doing and how he felt and tried to make him go to meetings...

I got up one night cause I was breastfeeding and just had to use the bathroom and he was sniffing something at the kitchen table... and I cried and he told me relapse is a part of recovery.

I called his mom and we just agreed he needed to go to more meetings... what else could we do- what he needed 6 months at least of rehab would have cost like 30,000. He had already borrowed a lot of money from his parents to buy into the restaurant and we had nothing in the bank- we were living paycheck to paycheck. I guess somewhere around this point he switched to heroin cause it was cheaper.

Then one day when Ky was 6.5 months old- we were all watching TV at night and the cops came to the door, and told me he had robbed a bank. The next day was a blur but basically I went home to my parents house and cried for a long time- while holding our baby...

I guess it was a cry for help- he owed a lot of people money at this point and maybe he just wanted to get caught so he would be locked up away from temptation. I just wish he knew how long he would be away for.

It took almost a whole year for him to get sentenced and I held onto some hope until then, but he was sentenced to 5 years. And the soonest he would get out is a total of 4.25 years served... he would miss the first 5 years of his first born sons life.

I almost couldn’t bare it and I was extremely depressed. He left me with so much debt and shame. Those years without him felt like 3 lifetimes. I was so hurt and scared that when he got out he would still use that I told him I was just going to live my life and move on... I didn’t visit him at one point for whole year, even though the first year I visited every week.

I got a job and eventually was able to buy a condo near my parents house in northwest New Jersey. Eventually an appeal Jeff filed with the help of his attorney went through and they took a year off his sentence and he would be eligible for parole in august of 2013- about 5 months after I bought the condo. So when he got out I gave him a chance- 1 last chance.

He has been here living with us for almost a year now- and I am so thankful and happy to have a whole family again. He is doing great and although I may question things he is doing and give him random drug tests and we are still rebuilding our lives we are together and he is alive.

I thank God everyday that he is not one of the ones that lost their battle with addiction and even when he was in prison I tried to be happy that at least I can talk to him- because if he had overdosed I would have begged God for a 2 minute conversation with him.

I feel like he tried so hard to be sober but he said it was like telling your body not to breath- everything tells you if you don’t do this your going to die.

I don’t even like telling the story to people I meet at my job anymore because I used to get the weirdest looks and condescending remarks about him that now I just pretend it didn’t happen because so many people don’t understand... but I never forget and I talk to the people that know about it all the time.

He is so outgoing and if anyone asks he tells them straight out about his addiction and crime. I feel that people need to understand more and not hide addiction from society because we can save so many more people if we open up and talk about addiction and help each other get through this together.